The Gender of the Holy Spirit: He, She or It? 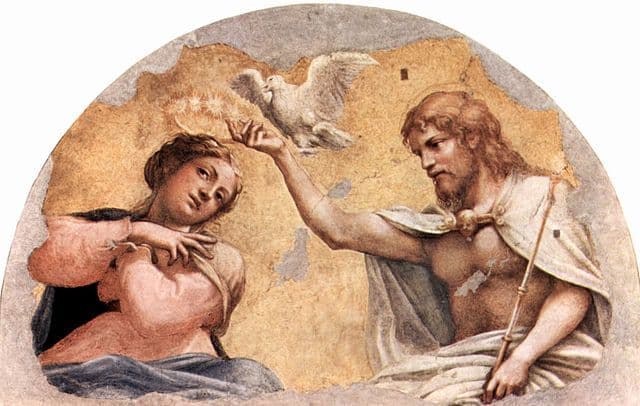 There has been a movement within the church for many years now known as Feminist Pneumatology that is attempting to redefine the masculine Gender of the Holy Spirit. However, this effort must be resisted by all genuine Christians as an attack on God’s word in an attempt to redefine God into a god of their own creation rather than the God of the Bible.

A Feminist Attack on the Gender of the Holy Spirit

Opponents who argue against the masculine gender of the Holy Spirit argue that since the Hebrew word for Spirit is feminine and the Greek word for Spirit is neuter that the Spirit does not have a gender. They argue that there are no biblical grounds for calling the Spirit a “he” and that we refer to the Spirit as such because of tradition, citing the masculine word for Spirit in the Latin that was used by the early Latin church. Thus they insist we can use “he”, “she” and/or “it” for the Holy Spirit, and that the pronoun used should vary according to context. This is the type of error that creeps into the church when we start trying to define God by first dividing the Trinity without first understanding the one God and then the Trinity in the manner and order in which God progressively revealed himself to humanity. Sadly, I have even seen some apologetic websites, which are supposed to defend the true faith, agreeing that the Spirit is genderless, though usually while still insisting we need to refer to him in masculine relational terms.

These erroneous teachings that attack the masculine gender of the Holy Spirit generally stem from a feminist perspective that the personification of God as Father is a symbol of patriarchy. It is argued that this contributes to the idea of male dominance that results in the oppression of women. Opponents of this feminist perspective assert that there are many feminine aspects and characteristics of God. Because of this, they suggest that we should use metaphorical language for God such as mother, lover, or friend as a complementary approach to the father imagery. However, this movement is a very dangerous deviation from Scripture. We should not be using metaphorical terms such as “mother” for God or “she” or “it” that are not biblical just to appease some who don’t like that fact that the Scripture portrays and identifies God through his Spirit as masculine because they think such a view subjects women to oppression. Though many might not recognize this, Feminist Pneumatology is also a subtle attack on biblical inspiration, for they assume that the Bible was produced by a patriarchal society as if the Holy Spirit was subject to such an influence and thus was not really the author. That to me signifies a very lowly view of the Spirit and his power. If he wanted to portray God as genderless, then he certainly had the ability to do so.

The Gender of God is Masculine

It is important to remember that though the Father, Son and Spirit are distinct centers of consciousness, they are also one being. What this means is that if the Bible is insisting that God does have gender, than whatever that gender is must define Father, Son and Holy Spirit. However, it must be clarified that when we speak of gender, we are not speaking of God’s sex, for God does not have sexual organs, and gender and sex are not the same thing, though in humans these will correlate with one another. The biblical reality is that God is a he, including the three persons of the Father, the Son and the Holy Spirit. It is the male gender through which God has chosen to reveal himself and it is the representation of God that he has given in his Word to his creation. He does not ever represent himself as of the female gender despite the occasional use of metaphors that proponents of a genderless God try to twist in support of their doctrine. Within the understanding of our world and the existence of two genders, it is correct to identify God as consisting of a nature that is masculine in gender. Though this is too much to go into in this blog, everything in existence was masculine until the creation of the female sex with the female gender in order to facilitate procreation in God’s physical creation. This includes the creatures around the throne of God as well as every single one of the angels. Thus, though no such distinction of genders existed prior, because everything was masculine (whatever that fully means and entails), and there was no need to even have such a term as masculine because feminine did not even exist, there now is a distinction that must be maintained. It is improper and irreverent to refer to God or his Spirit as “she” or “it.”

The gender of the Holy Spirit is also conveyed as masculine in the biblical text when Luke says, “And behold, thou shalt conceive in thy womb, and bring forth a son, and shalt call his name JESUS. … And the angel answered and said unto her, The Holy Spirit shall come upon thee, and the power of the Most High shall overshadow thee: wherefore also the holy thing which is begotten shall be called the Son of God” (Luke 1:31, 35 ASV). And Matthew writes, “Now the birth of Jesus Christ was on this wise: When his mother Mary had been betrothed to Joseph, before they came together she was found with child of the Holy Spirit” (Matt 1:18 ASV). God is the Father of Jesus, but Jesus was fathered by the person of the Holy Spirit. There is great difficulty here when one tries to make the gender of the Holy Spirit anything other than masculine. The obvious inference to the human mind is deliberate.

Final Thoughts on the Gender of the Holy Spirit

All of the centers of consciousness within the one Triune God are masculine, because God in his being is masculine. The subject could be explored and explained much further, but I want to keep this article short and to the point. Suffice it to say, God is masculine in nature, including the Holy Spirit. We should trust God’s word and the teaching of the Holy Spirit who tells us that such is the case, rather than trying to redefine God and mold him into our own reflections for whatever reason.