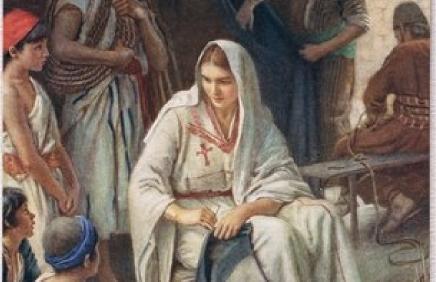 There has been an aggressive attempt over the last several decades to distort and fabricate the role of women in the church during apostolic times, including making extraordinary claims about women such as Phoebe and Priscilla by distorting the simplicity of references to them in Romans 16:1-5. Whatever we believe about the role of women in the contemporary church setting, it is important that we have an accurate portrayal of what was really taking place in the days of the apostles. Unfortunately, though some today are talking about restoring proper historical context concerning women in the church, they are instead rewriting and altering history with outlandish claims due to confirmation bias. For example, some in this movement strive to falsely portray the first two women in Romans 16 as leaders within the Christian community. This article will discuss the claims about these two women to show that such ideas are from the imagination rather than a part of historical reality.

The first woman we encounter in Romans 16 that is discussed today in regards to the role of women in the apostolic church is Phoebe. The text reads:

I commend unto you Phoebe our sister, who is a servant of the church that is at Cenchreae: that ye receive her in the Lord, worthily of the saints, and that ye assist her in whatsoever matter she may have need of you: for she herself also hath been a helper of many, and of mine own self. (Rom 16:1-2 ASV)

It is also important to note that in Romans 16:2 the Roman church is told to assist Phoebe and help her for she herself had also been a helper of others, including Paul. The Greek word for “helper” here is προστάτις, which according to my own thorough study of the word and its masculine equivalent simply means one who is standing before another in a voluntary response of servitude of self and/or resources. It should be defined within our context here as a “one who helps,” which correlates with the implication of “one who serves” in Rom. 16:1. Phoebe is one standing before others and Paul in volunteer servitude. Phoebe is a woman who helped and assisted others in an unofficial capacity in the same way that many women assisted Jesus. There is no indication of her helping in any official church capacity or activity. The entire context here in Romans about Phoebe is related to service, help, assistance, etc. and there is no validity in implying that διάκονος might be being used here with the implication that Phoebe is an official church deacon. Phoebe was involved in ministry and the church in the sense of providing help and assistance to others, including Paul. As much as some want to imagine more here than there really is, that’s the basic facts.

The second woman we encounter in Romans 16 that is discussed today in regards to the role of women in the apostolic church is Priscilla. The text reads:

Salute [Priscilla] and Aquila my fellow-workers in Christ Jesus, who for my life laid down their own necks; unto whom not only I give thanks, but also all the churches of the Gentiles: and salute the church that is in their house. (Rom 16:3-5 ASV)

When we get to this passage and others that mention Priscilla, some make grandiose claims about her role in church leadership while kicking her husband Aquila out of the context as if he didn’t even exist even though she is always mentioned in the biblical text along with her husband. The reason why, in these types of discussions, Aquila is often ignored is because his very presences spoils the grandiose of their claims. It’s quite wearisome and sad to me when I encounter this neglect of Aquila because I feel like many would love to wipe him off the pages of the Bible just in order to make Priscilla into what they want her to be. Though many claims have been made about Priscilla’s part in ministry, let’s take a closer look at the facts.

Another incident with Aquila and Priscilla that is often brought up in a struggle to find support for hailing Priscilla as a church leader is when the couple evangelized a man named Apollos. It is crucial to understand what is happening during this conversation. Examining these three verses are critical to a proper understanding about what was going on:

Now a certain Jew named Apollos, an Alexandrian by race, an eloquent man, came to Ephesus; and he was mighty in the scriptures. This man had been instructed in the way of the Lord; and being fervent in spirit, he spake and taught accurately the things concerning Jesus, knowing only the baptism of John: and he began to speak boldly in the synagogue. But when [Priscilla] and Aquila heard him, they took him unto them, and expounded unto him the way of God more accurately. (Acts 18:24-26 ASV)

It is first important to note that as far as we can determine, Priscilla was with her husband Aquila during this whole discussion with Apollos, which means that whatever she did was while her husband was there. We are not told what she said and what Aquila said, so anything we might imagine is pure conjecture. All we know is that a conversation took place in which they expounded to Apollos the way of God more clearly. Luke uses the word for “expounded” only in two other places, once for Peter simply telling the history of what happened when the Gentiles were converted (Acts 18:4) and once for Paul relating the historical events of Jesus and showing through the Scriptures how he was the Messiah (Acts 28:23).

As for Apollos, he is a man highly skilled in the Old Testament who had been instructed in the way of the Lord, but only knowing the baptism of John. In other words, he was probably instructed by John or one of his disciples, but had not yet come to understand that Jesus was the man whom John was preparing the way for. What the text seems to suggest is that Priscilla and Aquila heard him speak in the synagogue and then afterward simply told him that Jesus was the one he was preaching about. Chrysostom is most likely correct in seeing this as a private conversing that was distinct from a public gathering (Homilies on Romans XXXI). Chrysostom also classifies both Aquila and Priscilla as evangelists (based on Ephesians 4:11) who preached the Gospel in contrast to a position as apostles, prophets, and/or pastors and teachers (Homilies on Ephesians XI). What they did in his eyes is no different than a woman telling an unbeliever that Jesus lived and died for his or her sins. They were simply spreading the good news.

In a further attempt to strengthen the argument for Priscilla as a church leader, some make a big deal out of the use of the name of Priscilla first before Aquila in the biblical text when discussing the conversation with Apollo (Acts 18:26) as if that signifies that Aquila had a greater role in the discussion. However, what they sometimes fail to note is that in the introduction of Aquila and Priscilla within the same chapter the focus is on Aquila and there is nothing even said about Priscilla other than she is the wife of Aquila (Acts 18:2). After this, Priscilla’s name is mentioned first when it describes how they accompanied Paul to Syria (Acts 18:18). Does this mean that somehow Priscilla was more important in this event than Aquila? There are two other passages that use the name of Priscilla first (Rom. 16:3; 2 Tim. 4:19) and one that has Aquila first (1 Cor. 16:19). My wife and I are friends with a married couple that live down the street, but we usually, though not always, refer to them by the name of the wife first followed by the name of the husband, simply because we see the wife more because her husband is frequently off working. So, even in life today, this is quite normal. From the evidence above, I believe that some are making something out of nothing here.

With all things considered above, there is no evidence to support an imaginary leadership role in anything Priscilla did. Though we can imagine all types of things we want to believe, we really don’t know for certain anything at all about what Priscilla did as an individual and we do not even have one quote of anything she ever said. What we do know is that anything she did that might be relevant to the role of women in the church was always in the company of her husband. Priscilla to me is to be commended as a loyal Christian wife who stood by her husband’s side under his authority in their service to the Lord together as do the wives of many pastors and missionaries today. She actually reminds me of my own wife who has sometimes witnessed to others with me. She should be seen as an honorable model for who she really was, not the fabrication of some ideal for an agenda that wants to make her into something she was not.

There are other issues and arguments on the roles of women in the apostolic church that we did not go into here because this article was focused on the improper use of Romans 16 in the discussion. However, there is absolutely no evidence whatsoever that women in the church of the first century were in such roles. That idea is a work of fiction coming from the imagination of those who want to rewrite and change history in order to push their agenda. Whatever we might feel about the role of women in the church today, as Christians who serve a God of truth, we must be honest with the historical reality of the past if we are to come to a position on the matter that is based on fact.