Why Jesus Could Not Heal Mightily in His Hometown 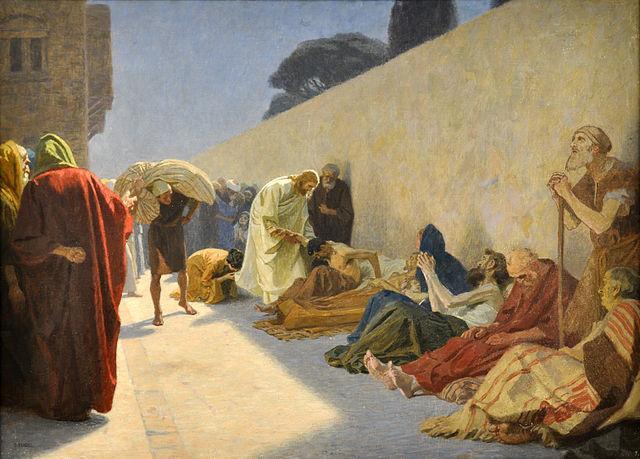 The Bible contains many episodes of Jesus healing others and great miracles. However, there is a historical occurrence with Jesus in Mark 6:1-6 in which he was hindered from great miracles in his hometown. The critical verse reads, “And he could there do no mighty work, save that he laid his hands upon a few sick folk, and healed them” (Mark 6:5). This has led to various explanations to explain why Jesus could not do so. For example, one position is that the people did not have enough faith and so Jesus was unable to heal them because unless they have that faith, he cannot do so. This idea is then applied to healing today with the explanation that if God does not heal us it is because we do not have enough faith. Without getting all into the fallacy of this type of thinking, this blog will show that the reason Jesus could not heal them is because they would not come to him and thus he had no opportunity to do so. It was not that Jesus tried and failed to heal because of their lack of faith, but that he was not able to do so because they would not seek him out in the first place. Here is the entire passage:

And he went out from thence; and he cometh into his own country; and his disciples follow him. And when the sabbath was come, he began to teach in the synagogue: and many hearing him were astonished, saying, Whence hath this man these things? and, What is the wisdom that is given unto this man, and what mean such mighty works wrought by his hands? Is not this the carpenter, the son of Mary, and brother of James, and Joses, and Judas, and Simon? and are not his sisters here with us? And they were offended in him. And Jesus said unto them, A prophet is not without honor, save in his own country, and among his own kin, and in his own house. And he could there do no mighty work, save that he laid his hands upon a few sick folk, and healed them. And he marvelled because of their unbelief. (Mark 6:1-6a ASV)

The passage of Mark 6:1-6 is part of a narrative flow that moves Jesus from a prior location to his own hometown. However, it is complete in a sense as including both his arrival and departure to and from his hometown. It follows the prior narrative of Jesus healing a woman who had an issue of blood for 12 years, followed by raising up a dead child to life (the daughter of a ruler of the synagogue) after being mocked and ridiculed by the mourners for saying the child was only sleeping and not dead. The woman and the synagogue leader had both sought out Jesus for healing of their sickness. Now he moves into his hometown and instead of finding people who seek him out so he can heal them, they reject him.

What follows this passage of Mark 6:1-6 is Jesus sending his 12 apostles out in pairs to preach repentance, cast out demons, and heal people. However, he indicates that some cities will reject them, which is relevant to our passage for he was just rejected by his own hometown. I see a flow that goes from healing those who were seeking him for healing, to being unable to heal those in his own town because they rejected him, to giving the authority to his apostles to heal as he sends them out where they also might be either accepted or rejected. Our passage within the context seems to be primarily part of a broader stress on two types of response to Jesus and his message with a secondary focus on the healing (related to those who come to him for such as in contrast to those who will not even receive him that they might be healed). Our passage within this broader context is primarily focused on those who reject him and thus are not healed.

Wording of the Passage

Below are the verses and/or parts of verses in Mark 6:1-6 that significantly differ when comparing the ASV, NAB, and NASB Bible version.

The first word to consider in Mark 6:1-6 is πατρίς that is translated as “own country,” “native place,” and “hometown” in the three versions above, which literally means ones fatherland, thus one’s hometown. “Own country” would not really fit the context here since the focus is on the community where Jesus grew up (for he was known by all the people). Country in English can imply a larger area and that is not the meaning here. The use of hometown probably conveys the best meaning in the context. Additionally, there is a discrepancy between whether the apostles simply accompanied Jesus or followed him. Based on my study of the other passages where it is used in the New Testament, the Greek word here has more of the sense to follow.

The next difference to discuss is “mighty works,” “mighty deeds,” and “miracles.” The Greek here is δύναμις (power), which appears to mean here in this context manifestations of supernatural power. We should note that it is not simply miracles, for it is contrasted in the context with simple healings that were something less (Mark 6:5). We probably should understand it as “mighty miracles” to get the full idea. After this, we have Jesus’ reaction to their unbelief. Is it marveled, amazed, or wondered? Since it can be any of these, one must determine this by the context.

The last word to consider here in Mark 6:1-6 is the difference between the versions of either “unbelief” or “lack of faith.” It is the Greek word ἀπιστία, and though it literally means “no faith.” From my study of its use in the biblical text, it usually refers basically to one not believing in someone or something.

I believe there are three main keywords and one important key phrase in Mark 6:1-6. The first keyword, used twice, is “hometown.” The focus here is that Jesus was in his own community, with those he grew up with. The second keyword is “mighty miracles,” which is also used twice. Jesus was not your ordinary healer, but one who did the miraculous. The third keyword, was “unbelief”; even though it is only used once, it is probably the most important keyword in the passage. The entire focus of the passage was on their rejection of Jesus because of such unbelief that he could be anybody extraordinary.

The key phrase is “they were offended in him.” This is tied in to their unbelief. It is their response to him because they knew him as part of their community. As one translation puts it, “And they would not accept him” (Mark 6:3 NJB).

The local synagogue mentioned in Mark 6:1-6 was the place where Jews gathered together on the Sabbath day as a local community and the Scriptures were both read and expounded upon. Thus Jesus here injects himself into the normal cultural custom of every Saturday for the Jews.

We also find the cultural aspect of work, where the son often took on the profession of his father. Jesus is called a carpenter only here in the Bible (Mark 6:3), while he is called the carpenter’s son in a complimentary account of this event (Matt 13:55).

Another cultural norm that seems to be suggested here is how close family members remain within the community as they grow to adulthood–at least in Nazareth. This can be seen in their statement, “Is not this the carpenter, the son of Mary, and brother of James, and Joses, and Judas, and Simon? and are not his sisters here with us?” (Mark 6:3 ASV). This also shows that this community where Jesus was from was probably small and tightly knit since they all seemed to know Jesus and all of his family.

Relation to Other New Testament Texts

Matthew and Luke also both describe this event in Mark 6:1-6 (Matt 13:54-58, Luke 4:16-30). Through all three accounts, we learn that Jesus went into the synagogue to read on the Sabbath and then began teaching, applying a Messianic biblical passage from Isaiah to himself. They immediately began discussing this among themselves in disbelief because he grew up among them. They eventually got so angry that they seized him and tried to kill him. In addition, while in Mark there is no record of him doing miracles there except healing a few sick people, Luke implies they had heard about the miracles he had performed while in Capernaum (Luke 4:23 ASV).

One thing I did notice that is also found in a lot of other passages in the Gospels is the people’s constant amazement of Jesus’ miracles and acknowledgement of his wisdom in his teaching such as we find here in our Mark passage (e.g., Mark 1:22, 27; 2:12; 12:17; Luke 2:47; 8:56; 9:43; etc.). Rarely are his miracles or his wisdom doubted (John 9:19). Even those who reject him believe in his miracles, though they sometimes attribute them to demonic activity (Mark 3:22).

One of the main theological points of Mark 6:1-6 has been centered around faith and healing, often with an unconvincing argument that Jesus could not work miracles because the people in his hometown of Nazareth did not have the faith necessary for him to do so. Yet, the text also has Jesus healing some of those who were sick. The unbelief being discussed was not about whether he could perform miracles; they believed in his wisdom and his miracles (Matt 13:54; Mark 6:2). It is more of a lack of belief in him for who he was because they knew him personally and did not honor him or accept him. I do not believe that this passage in particular is focusing on faith of the individual as a necessary requisite to receive physical healing from Christ. It’s not that he was trying to heal them and failed to do so as they came to him for healing, but that they did not come to him for such in the first place. Such an interpretation that he failed in his attempts to heal them would contradict the teaching in Scripture that Jesus healed all of the sick that came to him, not just some of them (Matt 4:24, 8:16, 12:15; also see Acts 5:16 for reference to the apostles).

I believe that the primary theological implication here in Mark 6:1-6 is centered around belief in Jesus rather than in reference to one’s degree of faith as it relates to physical healing. It is a spiritual focus rather than a physical one. Those who do not come to Jesus and accept him for who he is cannot be healed of their sinful condition and will not be saved. As Jesus says in another place, “and ye will not come to me, that ye may have life” (John 5:40 ASV).

The message in Mark 6:1-6 is not that we need to exhibit faith for Jesus to physically heal us. That is neither the meaning of the passage nor the focus. To stress such an idea is to ignore the real critical message that the Holy Spirit is trying to teach us here. All of humanity has before them a choice to accept Jesus or reject him. For those who accept him, he heals them of their sinful condition. However, for those who reject him, they will be left in their awful sinful state and will thus suffer the second death at the end of the era. What is at stake here is the eternal destiny of the soul, not the physical healing of the body. As they rejected Christ so that he was prevented from working miracles in their midst, so today those that reject him prevent him from performing that mighty work of healing with eternal life that saves their soul from a perpetual death.