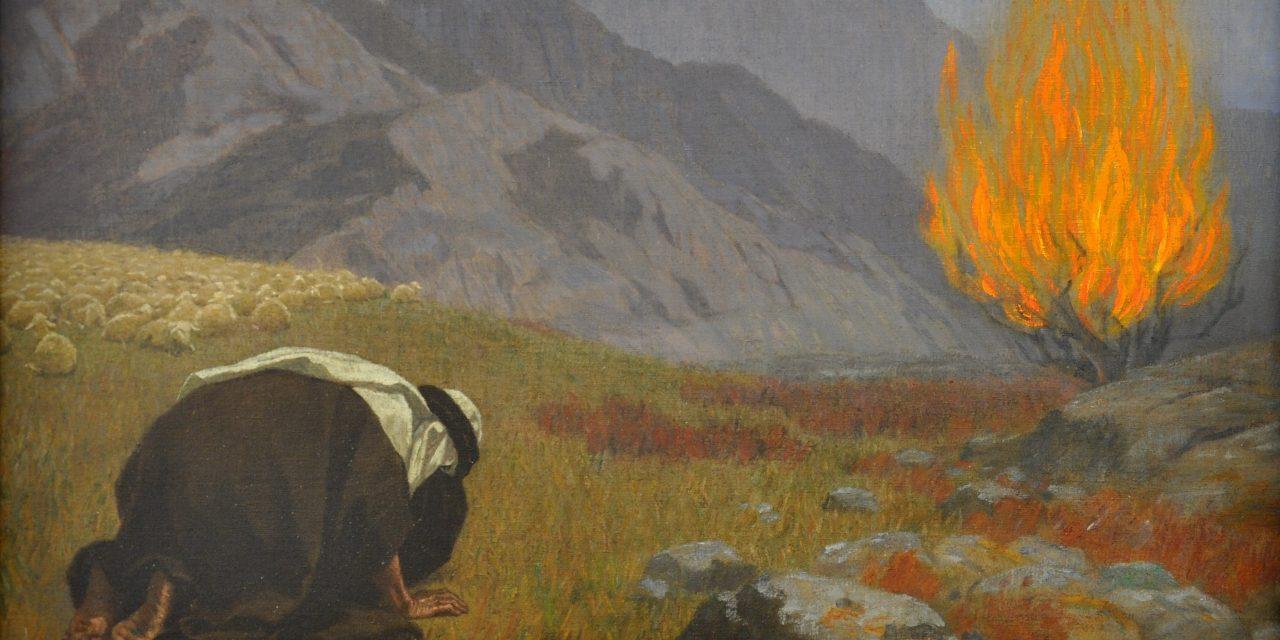 God appeared to Moses in the burning bush while he was tending the flock of his father-in-law in the wilderness of Midian. He spoke to Moses from the midst of a bush that was burning with fire–a fire that did not consume it. It was there that God revealed His great name to Moses and then sent him to deliver the nation of Israel from the bondage of Egypt.

Cursed is the Ground

In order to discover the deep significance of this miraculous encounter between God and Moses at the burning bush, and its application to us today, we must first venture back to the fall of Adam and Eve from paradise. After they sinned through disobedience, God pronounced a series of curses upon Satan, the woman, and the man, respectively. To the man he said:

Cursed is the ground because of you; through painful toil you will eat of it all the days of your life. It will produce thorns and thistles for you, and you will eat the plants of the field. By the sweat of your brow you will eat your food until you return to ground, since from it you were taken; for dust you are and to dust you will return. (Gen. 3:17-19 NIV)

Because of the sin of Adam, the earth itself was cursed and man who came from the earth was also cursed. All men and women who have been fathered through the line of Adam have now inherited this sinful nature and the curse along with it, including Moses who we find standing before the burning bush and talking with God.

Since thorns were a direct result of the curse on the ground because of sin, it is quite a wonder that God is speaking from the midst of a thorn bush (Acts 7:30 NASB). In addition, God commands him, “Take off your sandals, for the place where you are standing is holy ground” (Exo. 3:5 NIV). Though the ground of the earth was cursed, it was the presence of the one triune God that transformed cursed ground into holy ground; and even though the thorn bush was a result of that curse, the thorn bush was not consumed.

Jesus as the Burning Bush

From the midst of the thorn bush, God declared His name as “I AM WHO I AM” and instructed Moses, “This is what you will say to the Israelites: I AM has sent me to you” (Exo. 3:14 NIV). Centuries later, Jesus declared to the Jews, “I tell you the truth, before Abraham was born, I AM” (John 8:58 NIV). Here at the burning bush we have more than just a type of the true antitype in Jesus Christ, we have the one triune God Himself who would later be manifested to the world in Jesus Christ.

It is important to note that it is not the fire that spoke but rather a voice from within the fire, referred to in Scripture as God Himself (Exo. 3:4, Acts 7:31) who spoke through the angel of God in the fire (Exo. 3:2, Acts 7:30). Here is a wonderful manifestation of the one triune God, with the fire as the Holy Spirit, the angel (which actually means messenger) as the eternal Word, and God as a reference to the Father who speaks through the Word. The thorn bush that was not consumed symbolizes the body made in the likeness of sinful flesh through which God the Word would incarnate among men in Jesus Christ.

As God sent Moses from His presence at the burning bush to deliver the nation of Israel from bondage, God has now sent Jesus Christ as the antitype of the burning bush to deliver all nations from the bondage of sin. It is for this reason that Jesus was crowned with thorns before being crucified, to convey not only that He really was a king, but that He was taking the curse of our sins upon Himself in order to establish that kingdom in holiness. All our sins were poured out upon Jesus in order that we who were alienated from God may become holy by the purging of our sins through Christ.

Made Holy by God

Through Jesus Christ, we as Christians are also like the miraculous burning bush; for though our bodies of flesh are cursed through sin, the essence of both the Father and the Son are within us through the Holy Spirit (John 14:23). Even though God is a consuming fire who will one day judge our works by fire, consume the heavens and the earth by fire, and destroy the wicked in fire, the fire of God did not consume the thorn bush and neither will the fire of God ever consume us. As the area of earth surrounding the burning bush was made holy by the presence of God, so are we now made holy by the presence of God within us.

The real miracle of the burning bush has now been fulfilled in us through Jesus Christ. Though we were unholy and could never have become holy by our own efforts, we are now holy to God through the indwelling Holy Spirit. It is not just that God looks upon us as holy, but rather that we now are holy. This is attested to us by the fact that He lives within us. It is not our good works or our moral characters that have accomplished this miracle of holiness, but rather the grace of God who has poured out His Holy Spirit upon all men and women who will trust in Christ, the great I AM, as their Savior. The veil into the Holy of Holies has been ripped asunder by God, and the way through the veil is now open to all who have been born of the Spirit through the blood of Jesus, for there is now no longer a need to separate us from the holiness of God and we can now approach the Father in confidence as being holy.

Through the indwelling Holy Spirit, we are now a chosen race, a royal priesthood and a holy nation (1 Peter 2:10). We have been sealed by the Holy Spirit of promise, which has been given as a pledge of our inheritance and redemption (Eph. 1:13-14), and upon our resurrection we will be perfected in the righteousness and holiness of Christ. Through the completed work of Jesus Christ we will then function as holy priests of God and of Christ here on the earth (Rev. 20:6), and will minister with the holy garments of a resurrected body in His holy city, the heavenly Jerusalem.

The manifestation of God to Moses in the burning bush foreshadowed the great deliverance of mankind from the heavy bondage of sin and death into the real rest of holiness and eternal life through the work of Christ. It reflected the coming day of restoration for which the whole creation groans, when the children of God will be revealed in the holiness and glory of God at the resurrection. We as children of the Most High have hope in the great promise that is still to come, when the great curse of God on creation will finally pass away (Rev. 22:3).

Meanwhile, as long as we remain here on the earth as strangers and sojourners during this present wicked age, we must long to please our Father. Let us meditate on His holiness and remember that wherever we are, He is now within us and we are holy on account of His presence. As Moses removed a work of dead animal skins from off his feet in the presence of God, we too must remove all dead works from our life as we stand on holy ground in Jesus Christ. In our love for our Father, we are to surrender to the Holy Spirit while we heed the admonition of Peter, “Therefore, prepare your minds for action; be self-controlled; set your hope fully on the grace to be given you when Jesus Christ is revealed. As obedient children, do not conform to the evil desires you had when you lived in ignorance. But just as he who called you is holy, so be holy in all you do; for it is written: Be holy, because I am holy” (1 Pet. 1:13-16 NIV).