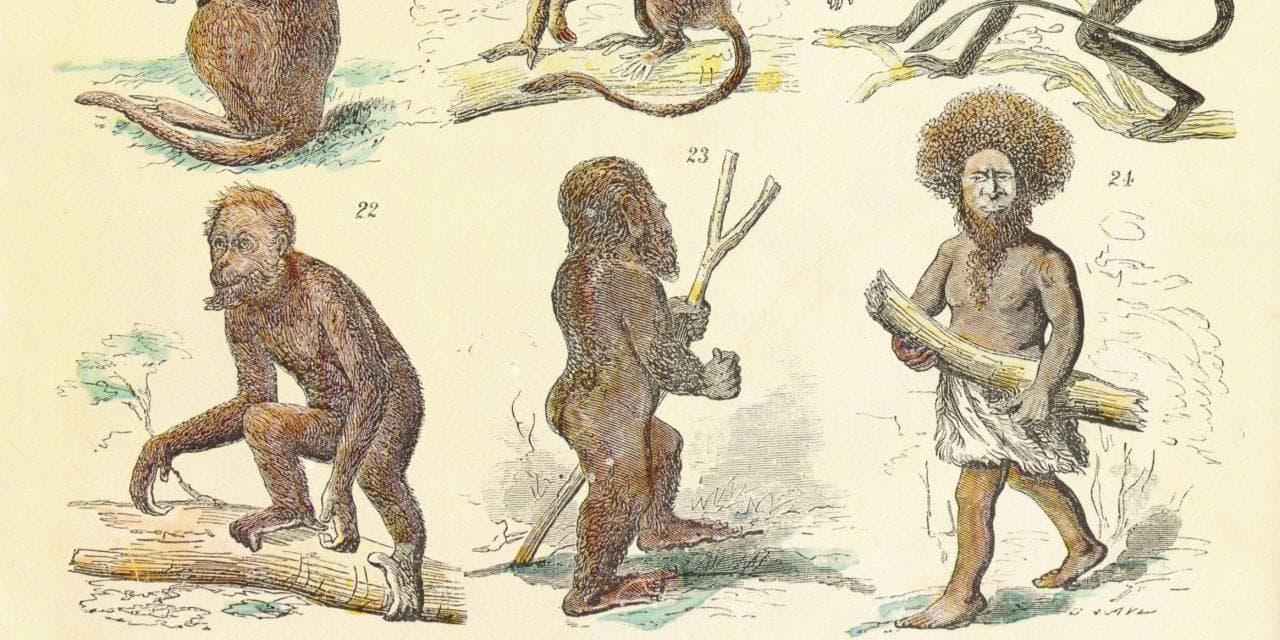 Is the evolution of mankind from lower life forms fact or fiction?  And what bearing does it have on the Bible anyhow?  The answer to both these questions is of crucial importance to Christians.  It is first important to clearly define my use of the terms species, speciation, macroevolution and microevolution so we are clear on all points of this discussion.  Here are my definitions below:

speciation – the division of one species into two or more other species.

macroevolution – the theory that all life forms and all species have evolved from one living organism through the process of speciation.

microevolution – the theory that living organisms evolve and change within their designated species.

Having clarified my use of the terms in this discourse, I can now proceed to answer the questions above.  Microevolution is most certainly a fact as can be seen by the variety in birds, cats, dogs, or other species.  Yet, when we examine macroevolution, this scientific theory must be called into serious question.  It is almost foolishness to proclaim that macroevolution is an established fact rather than a mere hypothesis.  In one of my science classes in college many years ago, I remember reading the phrase “speciation is rarely witnessed,” and was surprised at how misleading our science textbooks are.

The reality of the situation is that real speciation is never witnessed and never has been.  Don’t let anyone tell you otherwise, claiming that they have accomplished this as the microscopic level, etc., for this would not be real speciation of an animal.  Science cannot and has never been able to create a real new species from any animal that can really mate and produce fertile offspring.  And the longer we watch the large amount of species on the earth while awaiting the first real witness of speciation, the more their claim of innumerable random mutations over varying periods of thousands of years that resulted in all the different species seems to fall short of probability.  As Christianity falls or stands on the real bodily resurrection of Jesus Christ, so does evolution fall or stand on the speciation of biological life.

Another important fact for Christians to consider is that even if science were able to someday somehow prove that speciation did and does take place, this in itself would never provide the evidence that mankind evolved from a lower life species.  It is of course possible that God may have created a certain number of what I would term archetypes from which other species evolved, but with each species falling under one or another of the original archetypes.  Mankind would be an archetype of himself, having never evolved from a lower life form.

When one takes this into consideration and realizes that this would not be inconsistent with the biblical account, then their task of proving mankind evolved from a lower life form becomes even more difficult.  Proving that animals evolve and speciation takes places does not in itself demand that mankind evolved from a lower life form–it would only prove that animals evolve and speciation takes place, nothing more, nothing less.  When one examines the fossil record, it is quite obvious that to this day they have nothing whatsoever to substantiate the claim of mankind’s evolution from lower life forms other than a poor mixing together human and animal bones (i.e. Piltdown Man), mixing bones separated from great distances and signfificantly deeper depths in the in the geologic strata (i.e. Lucy), and other such acts of desperation, in order to fabricate their delusional missing links.

Though it is most certainly possible that God could have created mankind through a process of macroevolution, this is not what the Bible claims.  The biblical account of creation in Genesis is not a figurative description, but rather a literal explanation of how mankind was created.  To accept the claim that mankind evolved from a lower life form would not only contradict the claim of our creation in Genesis, but also call into question the truth of the entire theological framework of Christianity.  For if we evolved from lower life forms, then a lot of uncertainty would arise in the very concept of sin and accountability, as well as in the understanding of the souls of men and animals.

What would be the difference between men and animals in sin and the future of their souls?  When does accountability begin?  Do the animals have eternal souls as well since we came from them?  Are they held accountable when they murder another animal?  A human?  Are we guilty of murder if we kill an animal?  If one thinks this out, it is quite obvious that insurmountable problems exist that simply cannot be reconciled with the theological concepts of Christianity.  Any logical examination of the facts makes it quite clear that God created mankind as distinct from the animals.  This can be easily supported by 1) the literal account in Genesis that claims this is so; 2) that God never even implies that the souls of men and animals are equal, but instead often implies quite the opposite; and 3) there is absolutely no real evidence to date that substantiates the scientific claim that mankind evolved from lower life forms.