When Satan Fell From Heaven: Facts and Myth 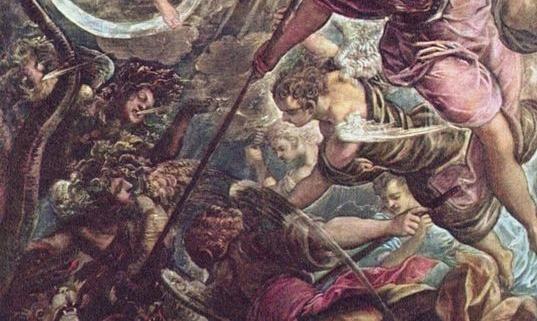 We often hear the story retold over and over again about how Satan rebelled in heaven with a third of the angels and how they were all defeated and cast out. Imagine coming to find out that the real account of what happened is quite different than the story passed around in Christian preaching and literature. That is what happened to me and may be what is about to happen to you right now.

The Fall of Satan

We know from Ezekiel and Isaiah that prior to his fall from heaven, Satan was an anointed cherub before the presence of God in heaven, full of wisdom and beauty; he was perfect, good and blameless when he was created. Then there came a point when his heart was lifted up with pride because of his beauty and his wisdom was corrupted by reason of his splendor, and he wanted to rule over the universe and be like God. He was then cast out of heaven because of the unrighteousness that was found in him (Ezek 28:12-19; Isa 14:13-14). Jesus could later say during his time on the earth that there was no truth in Satan and that his nature was to lie (John 8:44). Jesus also says he saw Satan fall like lightening from heaven (Luke 10:18).

Though the Scripture is vague about all the details of Satan’s fall, there is not any mention of Satan rebelling with the other angels in heaven to overthrow God at the time of his fall. In fact, such an idea is quite nonsensical. God was omniscient and as a cherub before his presence, it seems most probable that Satan knew this. When, where and how would Satan have been able to stir up a rebellion among the other angels? Every mention of Satan’s fall is in reference to him alone.

The Fall of the Other Angels

There are several places that mention the fall of the other angels and they all signify that it took place sometime after the fall of Satan, and for a different reason. Jude tells us that the angels did not preserve their original state and/or condition as purposed in the very beginning by God, but instead chose to leave their own proper habitation in order to enter into unnatural sexual relationships with human women (Jude 1:6-7). Also, there is not any evidence that this is a specific group of angels in contrast to other angels (as some have suggested) since Peter’s complimentary verse simply mentions the angels who sinned (2 Pet 2:4), which most likely includes every fallen angel. Thus the passages here in Jude and Peter most probably describe the fall of all the evil angels.

Jude is most likely referring to the event described in Genesis where the “sons of God” took wives of the daughters of men (Gen 6:2, 4). There are some modern critics who have rejected the idea that the “sons of God” were angels here, but that premise was almost universally accepted in ancient times by both Jews and Christians, except for the rise of a later position within Rabbinic Judaism during the second century that rejected the idea that angels can sin. Those who believed that angels sinned by having sexual relations with women include the church fathers Clement of Alexandria (Frag. Cass. 2; Stromata 3.7.59; Instructor 3.2), Ireaneus (Against Heresies 4:36:4), Justin Martyr (2 Apology 5), Tertullian (Apparel Women 1:2), and Athenagoras (Plea for the Christians 24), and among the Jews, the Jewish historian Josephus (A.J. 1:73) and the Jewish philosopher Philo (Gig. 1:6-18; QG 1:92). Paul may have also been making a vague reference to this (1 Cor 11:10). In addition, the “sons of God” is also the term for angels elsewhere (Job 1:6, 2:1, 38:7) and there is a contrast in the Genesis passage between “sons of God” and “daughters of men” that cannot be explained away due to a lack of a convincing argument. In the biblical text, the fall of the angels is always related to one group and one event: the angels leaving heaven in order to have sexual relationships with mortal women.

There is another reference to the fallen angels that also sheds further light upon this discussion. Interestingly, we are informed that Satan metaphorically pulled a third of the angels down to the earth with his tail (Rev 12:4), which suggests that the earth was already in existence when they sinned since the angels fell from heaven to the earth. There is no suggestion here of a united rebellion in heaven. The implication is that it was Satan who pulled them down and cast them to the earth, not God, implying that this entire group of angels followed after Satan later in sin and rebellion when they made a decision to abandon their original habitation. It correlates well with all the other passages. However, Satan did try to fight against God with his angels after the ascension of Christ and was defeated (Rev 12:7-9).

The discussion above should provide sufficient evidence to dispense with the nonsensical idea that Satan formulated a rebellion in heaven with the other angels to overthrow God. It simply did not happen. However, the fall of Satan and that of the angels who followed him in sin and rebellion later is a sad situation to ponder. They are created beings that were once in service to God in a high estate and their fall was quite grievous. They will now suffer damnation in an eternal fire (Matt 25:41). To presumptuously judge, mock, belittle or disrespect these former glorious beings unnecessarily in word, print or song is irreverence toward the God that created them. Jude warns us about this, saying, “Yet in the same way these [men] also in their constant daydreaming defile indeed the flesh, and disregard authority, and revile celestial beings. But Michael the archangel, when contending with the devil as he disputed about the body of Moses, did not dare bring against him a reviling judgment, but instead said, “The Lord rebuke you!” (Jude 1:8-9 EASV). Though we should recognize these evil beings as our enemies and be aware of our authority to rebuke them in the name of the Lord, we should not be leading our children in songs mocking Satan and speaking directly to him about how we are going to stomp all over him.

It is my hope that this post may have provided my readers with a better grasp on what the Bible teaches about what actually happened with Satan and the fallen angels.