Jesus and the Adulteress: A Story About Sin and Mercy 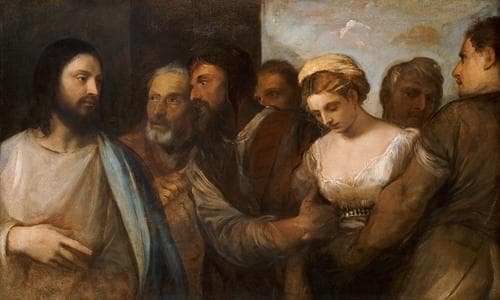 The story of Jesus and the adulteress in the gospel of John (8:1-11) is certainly a classic passage in biblical literature. Though this section is left out of many ancient manuscripts, it bares all the marks of a true account in the life of Jesus. The real message that it carries to us as believers of the Way is so dramatic that to dispose of it would be to remove part of the heart of the gospel of John along with its emphasis on the divinity of Jesus Christ. There is a belief by some, including myself, that this section may have been removed in many ancient manuscripts because of the fear that it would tend to weaken the seriousness of adultery among married women through misunderstanding.

Jesus and the Adulteress Meet

In this passage about Jesus and the adulteress, Jesus was teaching the people in His temple in Jerusalem when the scribes and Pharisees brought to Him a woman caught in the act of adultery. As usual, the scribes and the Pharisees were trying to trap Jesus in His words, and they put a great emphasis on the fact that she was caught “in the act” in their explanation to Him in order to eliminate any possibility of her innocence. “Now in the Law,” they declared, “Moses commanded us to stone such women; what then do you say?” (John 8:5 NASB). According to the law of Moses, the woman was most certainly condemned to death by stoning (Lev. 20:10, Deut. 22:22). In addition, the man who had committed adultery with her would also have been condemned to death by stoning, yet even though she was caught “in the act,” he was not present. This is further evidence that they were not sincere in their farce of wanting to please God and obey His laws.

Jesus had come preaching grace, love and forgiveness. If He were to allow the woman to be stoned to death, then His doctrine would be called into question among the people, and if He were to disagree, it would appear that He was teaching contrary to the laws of Moses rather than fulfilling it. In addition, if He were to have given permission to stone her, the scribes and Pharisees could have delivered Him up to the Romans since Jews did not have the right to put anyone to death under Roman law. They were certain that they had Jesus trapped.

In response to the scribes and Pharisees attempt of entrapment as they stood there before Jesus and the adulteress, Jesus stooped down and wrote with His finger on the ground. They persisted in asking Him for an answer. Then Jesus straightened up, and responded, “He who is without sin among you, let him be the first to throw a stone at her” (John 8:7 NASB). His answer to them conveys that divine wisdom and wit that leaves His adversaries speechless, such as portrayed in His response on paying taxes to Caesar during a different attempt to entrap Him in His words (Matt. 22:15-21). He then stooped down again and wrote on the ground.

What Did Jesus Write?

There has been a lot of speculation on exactly what Jesus wrote, but nobody knows for sure. What should concern us is why this is included in the passage and what it means. Why did Jesus stoop down and write on the ground? And why did He do it twice? The explanation is but another wonderful revelation by Jesus that He is God. When Moses received the Ten Commandments on Mount Sinai, God came down and wrote them on two stone tablets with His finger (Ex. 31:18). The first tablets were destroyed by Moses in anger over the sin of the people who had made the golden calf (Ex. 32:19). God then came down again and wrote the Ten Commandments a second time on two other tablets with His finger (Ex. 34:1-5). It is in this parallel that we have the answer and the deeper understanding of this event.

The woman was being judged upon her breaking of the seventh commandment, and she herself was a symbol of the adulterous Israel. The Pharisees and the scribes were in analogy bringing the sins of Israel before Jesus (and by application, those of the world). By stooping down and writing on the ground twice, Jesus was conveying that it was He who came down from heaven twice and wrote the Ten Commandments with His finger. The scribes and Pharisees did not understand the claim He was making through His writing on the ground with His finger, so Jesus soon followed with the verbal declaration, “Before Abraham was, I am,” implying to them that it was He who spoke to Moses in the burning bush (John 8:58, Exodus 3:14). They then responded by picking up stones to throw at Him, because they knew that He was proclaiming to be God (John 8:59). It was not an accident that this event leading to these two declarations of divinity by Jesus took place in His temple at Jerusalem. The Law of Moses that the scribes and Pharisees professed to obey came through Jesus Christ.

The first tablets of the Law were broken by Moses because of the sin of Israel, which showed from the very beginning that it would not be possible for them to keep and obey the law. While the first pair of tablets were thrown down as a symbol of the wrath of God upon sin, the second set of tablets were placed in the ark of the covenant under the mercy seat as a symbol of He who was to come with mercy and fulfill the demands of the law to deliver them by grace and truth. As it is written, “For the Law was given through Moses; grace and truth were realized through Jesus Christ” (John 1:17 NASB). When Moses was up on Mount Sinai the second time receiving the second pair of tablets with the Ten Commandments, the Lord passed by in front of him and declared, “The LORD, the LORD God, compassionate and gracious, slow to anger, and abounding in lovingkindness and truth; who keeps lovingkindness for thousands, who forgives iniquity, transgression and sin;” (Exodus 34:6-7a NASB). This was the reason for Jesus stooping down and writing on the ground a second time after His response.

In this enlightening story about Jesus and the adulteress, Jesus responded to the woman with love, compassion and forgiveness before she could even acknowledge or accept Him. This is what Jesus has done for the whole world in His sacrifice on Calvary to reconcile us to God. He loved us and died for us while we were still sinners (Roman 5:8, John 3:16). Often it is when we find ourselves in the worst of situations that God intervenes in His love to save us from ourselves. It was while in the depths of her sin and under the final condemnation to death, that this woman was brought to Jesus.

After the accusers departed one by one, Jesus straightened Himself up again. He remained as the only one without sin, who as God could justly condemn the woman for her sin. Yet, Jesus, our atonement for sin, told the woman, “neither do I condemn you, go your way; From now on sin no more” (John 8:11 NASB). Jesus again shows that He did not come into the world to condemn the world, but that through Him the world might be saved (John 3:17). There is no condemnation to those who are in Christ Jesus (Romans 8:1), and there is no one who can lay any charge to those who has been forgiven by Jesus Christ (Romans 8:33). What is conveyed to us here in this story of Jesus and the adulteress is that God has provided a deliverance from the condemnation of death through grace in Jesus Christ. With this deliverance from death, we are instructed to repent and no longer walk in sin.

Final Thoughts on Jesus and the Adulteress

Our Lord Jesus desires that all would come to Him and receive forgiveness of their sins that through Him they might receive the gift of eternal life. With that forgiveness, we pass from death into life, from darkness into light. In this story of Jesus and the adulteress, we have one of the greatest revelations of the mercy and compassion of God. We, too, have been brought before Him in our sins and stand condemned to certain death. As the woman was left alone with Jesus Christ, each one of us are also left standing alone before the Savior of the world. Yet, there is hope now for those who bring their sin before Him in in repentance, for our Lord promises “I am the resurrection and the life; he who believes in Me shall live even if he dies, and everyone who lives and believes in me shall never die” (John 11:25-26 NASB). Humbled before the God Who spoke to Moses in the burning bush and Who wrote the Ten Commandments, the fear of death fades away at His soothing words of comfort that He no longer condemns us; and we now long to fulfill His command to us, “From now on sin no more” (John 11:11 NASB).