The Serpent and Satan in Biblical Thought 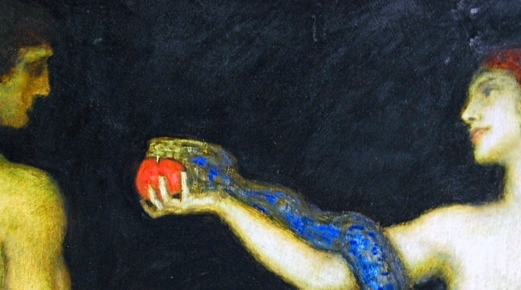 It may come as a shock to many Christians that the serpent in the Garden of Eden was not always associated with Satan in Jewish thought. The association of the serpent with Satan was slow in coming and not found in the Old Testament at all. Instead, it was a progressive revelation that only became solidified in the New Testament. This article will explore the ideas of the serpent and Satan in early Jewish thought, and then show how the association between the two was finally acknowledged and taught by Jesus and his disciples.

The Serpent in the Old Testament

In the Old Testament, the serpent is simply portrayed as a talking animal. Adam and Eve probably did not understand who the serpent was themselves since they did not even have a grasp of good and evil when this took place. The way it is told in Genesis may very well be from the perspective of Adam and Eve describing how they experienced it.

In fact, the first century Jewish historian Josephus, writing after the time of Jesus, still seems to believe that the serpent was one of the many animals God created. He writes:

But while all the living creatures had one language, {e} at that time, the serpent, which then lived together with Adam and his wife, showed an envious disposition, at his supposition of their living happily, and in obedience to the commands of God; and, imagining that, when they disobeyed them, they would fall into calamities, he persuaded the woman, out of a malicious intention, to taste of the tree of knowledge, telling them, that in that tree was the knowledge of good and evil; which knowledge, when they should obtain, they would lead a happy life; nay, a life not inferior to that of a god: by which means he overcame the woman, and persuaded her to despise the command of God. . . . He also deprived the serpent of speech, out of indignation at his malicious disposition toward Adam. Besides this, he inserted poison under his tongue, and made him an enemy to men; and suggested to them that they should direct their strokes against his head, that being the place wherein lay his mischievous designs toward men, and it being easiest to take vengeance on him that way: and when he had deprived him of the use of his feet, he made him to go rolling all along, and dragging himself upon the ground. (Josephus, A.J. 1:41-43, 150)

The first century Jewish philosopher Philo did not take the story of the talking serpent literally, but instead saw it as portraying allegorical truths (De opificio mundi 1:156-57ff.). Though the work Quaestiones in Genesim by Philo associates the serpent with the devil (Quaestiones in Genesim 136), this statement was probably not written by Philo, but a later copyist, for it contradicts his many other references to the serpent as metaphorical, and he never mentions the devil anywhere else at all in his writings. There is no indication in the Old Testament that the serpent was associated with Satan or the devil. There may be some vague references to the serpent (Job 41:34; Ps 74:14; Isa 27:1), but even so, these do not clearly associate him with Satan. The first clear legitimate reference to an identification of Satan, the devil, with the serpent in Jewish literature is probably found in the apocrypha, which reads, “But by the envy of the devil, death entered the world, and they who are allied with him experience it” (Wis 2:24 NAB). This may have been originally written as early as the middle of the first century B.C., about 50 years or so before the coming of Jesus. However, a document from the Dead Sea Scrolls (4Q543, ms B), probably originally written in the second century B.C. at the latest, may be associating the serpent from the Garden of Eden with the devil.

Satan in the Old Testament

The name “Satan” is satan in the Hebrew and Satanas in the Greek, meaning an adversary or enemy who opposes or resists. What many might find surprising is that Satan is never portrayed in the Old Testament as a deceiver and a liar, but the adversary and accuser. He is mentioned only in Job and Zechariah (Job 1:6-12; 1:1-7; Zech 3:1-2); the reference to Satan in 1 Chron 21:1 should be really be understood as an adversary or enemy that stood up against Israel in warfare, which was the reason David decided to number his people. In other words, there is no indication that the ancient Jews of the Old Testament associated the serpent with Satan.

Satan in the New Testament

When we get to the New Testament, however, all of this changes. Satan is also called “the devil” in the New Testament based on the Greek word διάβολος, which means one who slanderers or makes false accusations. In addition, he is also now called “the evil one.” Some have incorrectly asserted that there is still not an association between the serpent and Satan in the New Testament, but they are incorrect. The New Testament clearly teaches a much more broad idea about Satan, for though he is still an adversary and accuser (1 Tim 5:14-15; Rev 12:10), he is also an oppressor, a tempter, a liar, and a deceiver of the world who spreads evil in spiritual warfare against God and his people in whatever ways he can. It is through this broader understanding about Satan that his correlation with the serpent begins to emerge.

The earliest reference to Satan we find in the New Testament is when he tempts Jesus in a similar manner as the serpent did with Eve (Matt 4:1-10; also see Mark 1:13; Luke 4:1-13). In Matthew’s account of this event, we find the titles “tempter,” “devil,” and Satan being used interchangeably. In addition, Jesus later rebukes Peter, calling him Satan, because Peter was speaking as a tempter by telling Jesus he did not have to die and sacrifice himself (Matt 16:22-23; Mark 8:32-33). In the Lord’s prayer, Jesus may also be attributing temptation to Satan as the evil one (Matt 6:13). Satan can even tempt Christians to lie and to commit sexual immorality (Acts 5:3; 1 Cor 7:5).

Ye are of your father the devil, and the lusts of your father it is your will to do. He was a murderer from the beginning, and standeth not in the truth, because there is no truth in him. When he speaketh a lie, he speaketh of his own: for he is a liar, and the father thereof. (John 8:44 ASV)

The Serpent in the New Testament

In the New Testament, Satan has now taken on all the attributes of the serpent and he is now finally correctly associated with the serpent. Not only did John vaguely infer such in the passage up above in which Jesus calls him a “murderer,” but makes this very clear in the following passages:

And the great dragon was cast down, the old serpent, he that is called the Devil and Satan, the deceiver of the whole world; he was cast down to the earth, and his angels were cast down with him. (Rev 12:9 ASV)

And he laid hold on the dragon, the old serpent, which is the Devil and Satan, and bound him for a thousand years, (Rev 20:2 ASV)

These passages not only associate Satan with the serpent, but the devil as well. It is quite clear here that John believes that the dragon, the old serpent, the devil, and Satan are one and the same. However, it is not only John that has made that association, but Paul as well. He declares, “And the God of peace shall bruise Satan under your feet shortly” (Rom 16:20 ASV). This is almost certainly referring to God’s curse upon the serpent when he said, “I will put enmity between thee and the woman, and between thy seed and her seed: he shall bruise thy head, and thou shalt bruise his heel” (Gen 3:15 ASV).* This passage contains a veiled prophecy about how Jesus as the seed of the woman would destroy the serpent and the effects of what the serpent had done by Jesus’ work on the cross, though this would not have been understood in the early days of mankind. Whether Satan spoke to Eve through the serpent or was transformed into a serpent for his evil deed is not explained, but it is definitely taken as a real historical event in both the Old Testament and the New Testament.

God’s revelation was often progressive in which he wanted mankind to learn one foundational truth before they learned another, allowing them to then build on the primary truth. In this way, our insight into the things of God is founded upon a firm and logical foundation. For example, God wanted us to first learn that he was only one being, firmly establishing this in the psyche of mankind before clearly revealing the secondary truth that he has three centers of consciousness (whom we call “persons”). When it comes to the serpent, the foundational idea is the disaster that follows when one chooses to listen to someone else rather than God. Eve listened to the serpent and Adam listened to Eve. In the progression of time, God provided further revelation that the serpent and Satan the accuser were not two beings, but rather one being working against God and mankind. He is the serpent who tempts, lies and deceives to lead mankind into sin against God, as well as Satan who then turns around and accuses mankind of sin to God.

* The Hebrew word shuwph translated here in Gen 3:15 as “bruise” is rare, used only four times in three places in the entire Old Testament. Paul uses a different Greek word to translate the Hebrew word shuwph than the one found in the early Greek LXX translation of Gen 3:15. However, he probably wrote Rom 16:20 with the Hebrew passage of Gen 3:15 in mind, providing his own translation rather than relying on the LXX here. He selected the Greek word συντρίβω for shuwph, which is an acceptable translation of that Hebrew word; this is proven by the LXX translation of the same word in Job 9:17 to ἐκτρίβω, which is, like συντρίβω, a compound using the verb τρίβω.