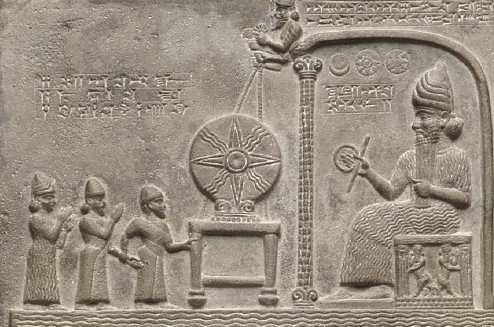 There is a teaching among Seven Day Adventists and others in various forms of literature and websites that assert the ancient Babylonians used sun amulets that included sun-squares on their face. These sun-squares (aka magic squares) consist of 36 squares (6 x 6), each numbered as designated with one of the numbers ranging from 1 to 36. The significance is that adding six numbers wherever one can horizontally, diagonally or vertically adds up to 111, so that then adding the six rows or columns that each equal 111 always equals the total of 666 (however, adding all number from 1 to 36 always equals 666).

Anderson provides us below with drawings that he claims were made from photos of such Babylonian sun amulets found in the Berlin Museum in 1910 (125-27). Notice the sun, moon and other symbols on the face and a sun-square on their backside. Despite these drawings offered by Anderson, he does not provide us with anything substantial regarding where these supposed amulets were discovered, their actual age, etc. However, the drawings he provides offer evidence in themselves that these coins are definitely not from ancient Babylon; if this were so, the language on the coins would then be a Semitic language known as Akkadian, which is not the case for either coin. In fact, the second coin is actually written in Latin. Thus, despite the assertion by Anderson that these are “amulets worn by pagan sun-worshiping priests” (126), that simply is not true.

In fact, I have not been able to find any evidence that such amulets as those in his drawings with the sun-square, or even the idea of such sun-squares in themselves, ever existed in ancient Babylon in the first place. The earliest source that I could find for the existence of an actual sun-square was this iron plate with Arabic numbers from the Yuan Dynasty (1206 to 1368) depicted in the photo below, which was discovered in 1956 in the Shaanxi Province and is now in the Shaanxi History Museum in Xi’an, China. Though the Babylonians did worship the so-called sun-god Shamesh, the claim that ancient priests in Babylon used such amulets and sun-squares in Babylon is not substantiated by the facts. Additionally, the further assertion made by many Seven Day Adventists on various websites that these supposed sun amulets and sun-squares existed in Babylon before Revelation was written and thus is relevant to John’s use of the number 666 in Revelation 13:17-18 is nonsensical and false.

Sunday Worship and the Sun-god?

Even if such sun amulets and sun-squares had been used in Babylonian sun-god worship, their existence would still not substantiate the claims of Seven Day Adventists that Sunday worship is related to the mark of the beast. In fact, there is nothing whatsoever in the biblical text to support such an idea. Additionally, everything we have from church history supports the position that the church from earliest times gathered together on the first day of the week because that was the day that Jesus was raised from the dead. That decision has nothing whatsoever to do with the Sabbath day. Additionally, Sunday worship has nothing to do with the worship of the sun-god; to suggest that it does is almost as nonsensical as suggesting that Jesus worshiped the sun-god because he chose to be raised to life on a Sunday.

Though there is a teaching in various works and on many websites that Anderson’s supposed Babylonian sun amulets and sun-squares existed prior to the composition of Revelation, this is simply false as I have shown up above. I welcome anybody that believes they have found supporting evidence that can be validated from a genuine source to send me what you have found. However, unless such evidence is forthcoming, I have no choice but to insist that the entire claim of these Babylonian sun amulets with sun-squares is a dupe (probably unintentional on the parts of most) that perpetuates a false substantiation for one aspect of Seven Day Adventist thought in regards to Sunday worship. What they are portraying as related to Babylonian sun-god worship is in fact nothing more than a magical square of the sun that was formulated long after the empire of Babylon and most likely long after the composition of the Book of Revelation.

The photo of the Sun God Tablet at the head of this article is a portion of a photo from the British Museum. Used under Creative Commons license 4.0.

I will bless the Lord at all times; his praise shall continually be in my mouth.
Psalm 34:1